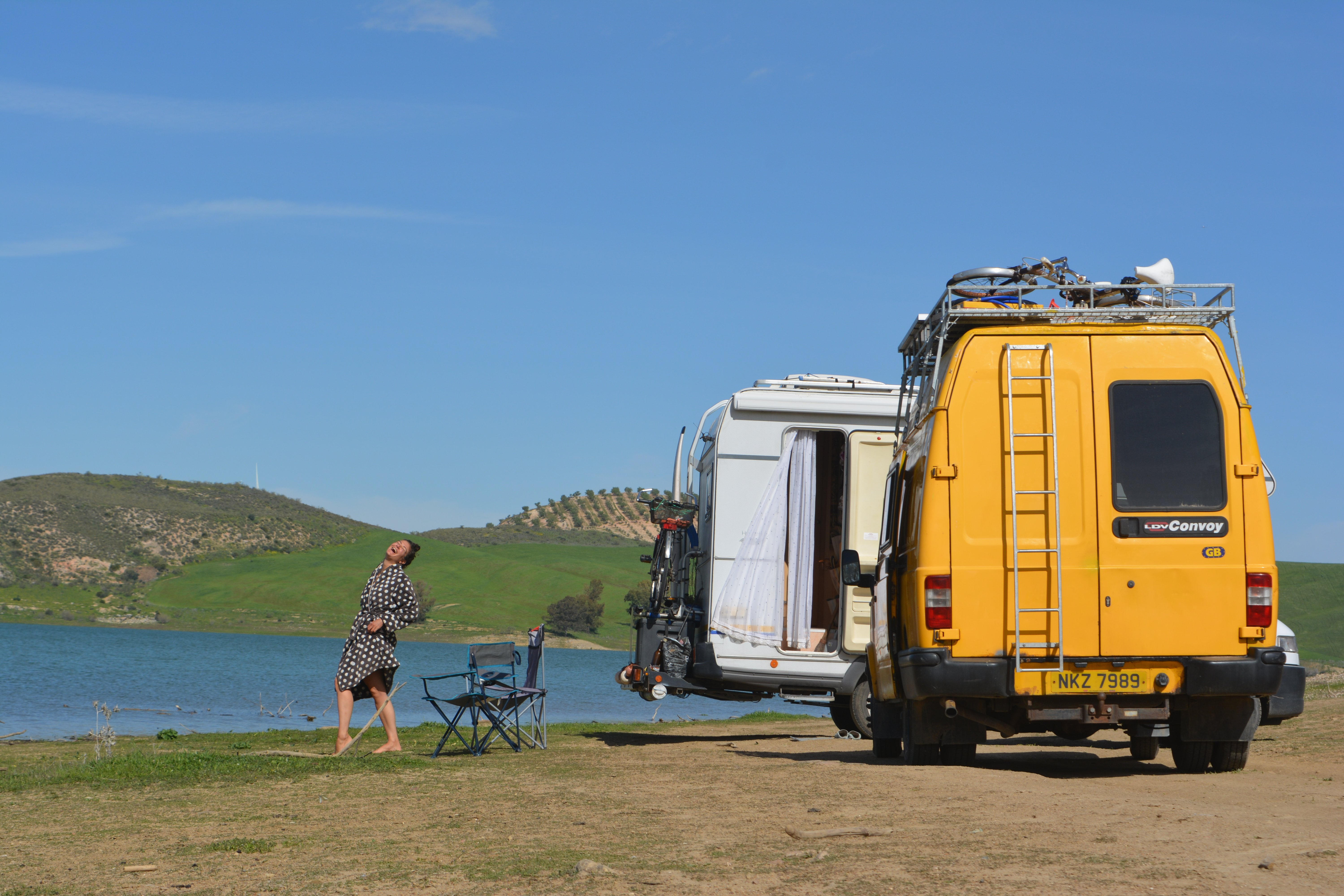 I drove with my friend Manu for a few weeks across the South of Spain, here’s some pictures!

Our first stop after Arcos de la Frontera where we saw the big religious ceremony (Easter in Andalucia) was a nice looking lake by the small town of Zahara de la Seirra. Access to the lake was down a really bumpy path just off the main road. It was a bit tricky but we persevered and were rewarded with a beautiful place to park right by the side of the lake.

Next was the town of Ronda, well known for it’s huge bridge that sits above the huge ‘El Tajo’  canyon and the Guadalevín River that divides the town in two.

It really is epic, like something from The Lord of the Rings. We did some touristy things and ate some Tapas. Sometimes it’s fun to be a tourist!

I’d heard about some hot springs just outside the town of Santa Fe by Granada. We’d found a point on Google Maps so we drove there first to check out the area. When we arrived, however, all entrances to the springs were blocked by huge skips full of rubble. We looked at all the obvious roads but all seemed impassable.

Not to be deterred from the promise of a hot bath we decided to try and walk to the springs and work out a possible route back. As we neared the pools we saw quite a few vans already parked near. There must be a way in! We asked a German couple how they got in and they told us that they got lost and it took them about an hour to find a way in, not so helpful. They did tell us a route where it was possible to squeeze past one of the skips though so we decided to try and find this.

After a few wrong turns down tiny, unmarked dirt paths lined with olive trees we eventually found the route. A path had been made at the side of one of the skips just wide enough to drive through.

20 minutes and some pretty hardcore manoeuvring later we were in! We found a spot on the top of a hill and parked for the night. We were exhausted and looking forward to a long soak the following day.

In the morning we were greeted by a beautiful view of the snow-capped Seirra Nevada.

The pools themselves did not disappoint. There were 8 in total with two large ones at the top and the others arranged in a cascade down the hill with waterfalls flowing into two of them. It was glorious and definitely worth the effort to get in.

Our final stop was just before Granada. We didn’t have much time so instead of exploring the city we found a nice spot to park with a view of the mountains. There was a trail to walk along and lots of mountain bikers, it looked like a great place for some downhill biking although I think it would probably be the end of my little bike!

This part of Spain is beautiful, I’d highly recommend it. Most of the drives were through winding mountain roads and the views were spectacular!